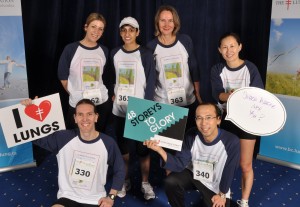 Although already very much involved in efforts to improve the diagnosis and management of patients with Chronic Obstructive Pulmonary Disease (COPD) at the PROOF Centre, the team – christened The PROOF is in the Pudding – stairclimbed this year to join forces with others in the community who are also working hard to overcome lung disease. Thanks to the support of colleagues and family friends, the team raised $1,720 in total. The event itself raised close to $150,000.

For The PROOF is in the Pudding, the stairclimb was exhausting, yet wildly exhilarating! Most team members were climbing the last flight of the 48 storey tower before they knew it and crossed the finishing line with a great sense of accomplishment. Official climb times for the team were impressive, ranging from 6 mins and 29 secs to 9 mins and 02 secs. Team members are already thinking about how they can beat their times at next year’s climb!

The PROOF is in the Pudding is proud to be making a difference in the lung health community. We would like to thank all our friends and colleagues from the PROOF Centre and the James Hogg Research Centre for their contributions and moral support. We hope to have just as much fun participating in the BC Lung Association’s Annual Stairclimb for Clean Air next year!

Climbing to new heights: The PROOF is in the Pudding