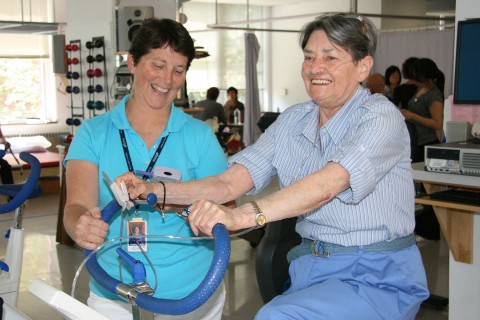 Biomarkers to diagnose and prevent ‘lung attacks’ that can kill

Vivianne Toupin knows firsthand just how deadly chronic obstructive pulmonary disease (COPD) can be. In her lifetime, three of her family members have succumbed to COPD – a disease which damages the airways and air sacs of the lungs, making it hard to breathe. Among them were her two uncles, and her father who spent his last years waiting to die from the progressively debilitating condition. The disease has not spared the women in her family either, as both Vivianne and her youngest sister continue their ongoing battle with COPD. Nevertheless, Vivianne is determined to be more than just another digit that makes up the growing number of individuals afflicted by the disease in Canada. As a supporter of and participant in COPD research, she is determined to stop the disease that has victimized her family.

Unbeknownst to most, COPD affects close to three million Canadians, approximately half of whom remain undiagnosed. Although it is one of the most common lung diseases and is a disease that kills one person every ten seconds, COPD frequently remains undetected due to inadequate diagnostic tools. Lung function tests that are presently being used for identifying COPD are not very specific to the disease, as lung function can be affected by a number of different reasons including asthma, pneumonia, heart failure and even a cold.

“Lung function measurements are not very specific for COPD, clinicians – especially those who are inexperienced – often guess at the diagnosis. This may lead to the wrong treatment and expose patients to unnecessary costs and side effects,” says Dr. Don Sin, Canada Research Chair in COPD and Head of the Respiratory Division of St. Paul’s Hospital, Providence Health Care.

In addition to the lack of tools to diagnose COPD, there is also no existing way of predicting the onset of acute worsening that some COPD patients like Vivianne suffer from. Often referred to as “lung attacks” or exacerbations, they sharply worsen COPD symptoms like breathlessness, coughing, and fatigue. Lung exacerbations which are commonly triggered by viral or bacterial infections can be fatal, and are the leading cause of hospitalization and death for patients with COPD. Indeed, such exacerbations are the leading cause of hospitalization among all ailments seen in emergency rooms across Canada.

For Vivianne, experiencing an exacerbation is akin to being in a breathless paralysis.

“When you get a lung attack, your capacity to breathe is reduced to half,” shares Vivianne who suffers from an exacerbation at least once a year. “And everything suddenly freezes. Your mind stops working, you are constantly gasping for air, and you have no energy. You basically become a vegetable.”

It takes at least a few weeks before Vivianne is able to resume life normally after suffering through an attack. Such episodes leave her frail and devoid of energy to carry out even the simplest of her daily tasks.

To help COPD patients like Vivianne to cope better, Dr. Sin is leading a multi-million dollar program within the Centre of Excellence for Prevention of Organ Failure (PROOF Centre) to discover and develop biomarker blood tests to help clinicians diagnose the disease more accurately and predict which COPD patients will experience life-threatening lung attacks. The biomarkers will help doctors to guide therapy after diagnosis, and may be used to help facilitate the development of new therapies to treat COPD in improved ways. The program is well underway, and researchers in the PROOF Centre are expecting to have candidate biomarker sets identified by the end of 2011.

For Dr. Sin, spearheading a program that will eventually lead to improved patient management of those suffering from a disease without a cure makes perfect sense.

“We absolutely need blood biomarkers in COPD”, he reiterates. “We need them to prevent hospitalizations, further lung damage, and even death.”

As a participant in the PROOF Centre’s COPD Biomarker Program, Vivianne shares the same view. Having survived numerous lung attacks that are extremely difficult to treat, she recognizes the importance of the research undertaken to develop biomarker blood tests in COPD.

“This research could possibly enhance the life of COPD patients, and maybe even extend their lives,” says Vivianne.