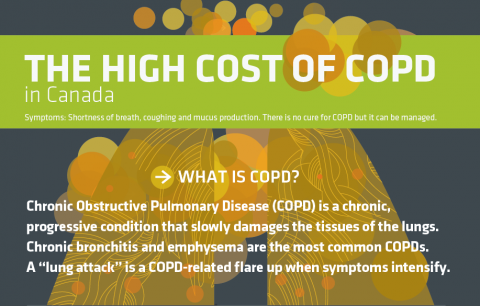 View our infographic on The High Cost of COPD.

• Chronic Obstructive Pulmonary Disease (COPD) is a long-lasting respiratory disorder that causes the airways of the lungs to be inflamed and become “obstructed”. The two major forms of the disease include chronic bronchitis and emphysema1.

• Those suffering from COPD usually experience shortness of breath, long-lasting coughs, and sputum production. COPD gradually deprive individuals of their health and vitality, and affects their quality of life. Up to 79 per cent of Canadians with COPD avoid everyday activities2.

• Hospital admissions for COPD lung attacks in Canada averaged a 10-day length of stay at a cost of $10,000 per stay. The total cost of COPD hospitalizations is estimated to be at $1.5 billion a year3.

• Canadian COPD patients are well below the global average (55% versus 73%) for accessing health care services in response to a lung attack6.

• The disease is especially prevalent among younger Canadian baby boomers – one in seven Canadians aged 45 to 49 (375,000) may have COPD7.

• According to the latest estimates by the World Health Organization (WHO) in 2007, 210 million people currently have COPD. The disease is predicted to become the third leading cause of death worldwide by 20308.

• COPD poses a huge drain on health resources and carries a significant economic in Canada. It accounts for the highest rate of hospital admission and readmission among major chronic illnesses in the country. 18% of COPD patients were readmitted once within the year and 14% twice within the year9.