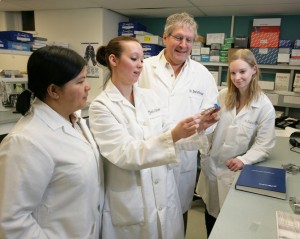 Dr. McManus has long been committed to training and mentoring scientist trainees across a range of disciplines

Dr. Bruce McManus, Director of the Centre of Excellence for the Prevention of Organ Failure (PROOF) and Professor in the Department of Pathology and Laboratory Medicine at the Faculty of Medicine, University of British Columbia, has been awarded with the 2012 LifeSciences British Columbia (BC) Award for Leadership.

The LifeSciences BC awards are presented annually to recognize individuals and organizations that have made significant contributions to the development of British Columbia’s life sciences industry.

Dr. McManus has long been committed to training and mentoring scientist trainees across a range of disciplines and has convened many public and private sector partnerships in research aimed at preserving or restoring heart and lung health. He has been recognized for his scientific contributions by numerous institutions and organizations through visiting professorships and lectureships, was co-recipient of the prestigious Max Planck Research Award in 1991, elected to the Royal Society of Canada as a Fellow of the Academy of Sciences in 2002, and became an inaugural Fellow of the Canadian Academy of Health Sciences in 2005. Dr. McManus has received the Research Achievement Award of the Canadian Cardiovascular Society, the BC Innovation Council’s Lieutenant Governor’s Technology Innovation Award and the CSATVB Scientific Excellence Award, Canadian Society for Atherosclerosis, Thrombosis and Vascular Biology.

“This year’s award winners are outstanding,” says Don Enns, President of LifeSciences BC. “British Columbia has some great leaders in biotech, and the four individuals and one company selected for these awards are incredible innovators. Our sector is world-class, and these winners represent significant achievements resulting in economic growth for B.C.”

This year’s theme, “Create. Connect. Converge.” is meant to demonstrate how today’s researchers and business leaders are creating and connecting locally and globally. Science and technology are converging, and B.C.’s life sciences sector is leading the way.

The LifeSciences British Columbia Awards was presented at a gala ceremony on April 19, 2012, in front of an audience of approximately 600 guests representing the biopharmaceutical, medical device, bioproducts, bioenergy and greater life sciences community at the Vancouver Convention Centre.

LifeSciences BC is a not-for-profit, non-government industry association that represents and supports the biopharmaceutical, medical device, bioproducts, bioenergy and greater life sciences community of British Columbia through facilitation of partnering and investment, advocacy, education and promotion of our world-class science and industry.